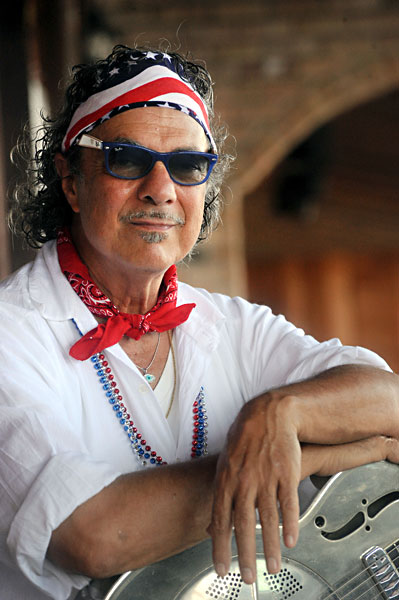 Call it what you want, but to Johnny Nicholas it’s the blues

Johnny Nicholas has it sweet.

His 6pm Wednesday sets at the Saxon Pub have been standing room only since they began in June. As a musician, he’s earned emeritus status among bluesmen black and white. Topping it off, he and his wife of more than 30 years, Brenda, own and operate Fredericksburg’s ever popular Hill Top Cafe (see “Hill Top Cafe”).

Yet lives well spent are seldom normal. For Nicholas, a crazy quilt of cultures fed his hunger for the blues, coloring it with vibrant influences. He needed that when family tragedy left a vicious hole not even the blues could fill. Making matters worse, the very music that’s driven his life now flounders, taking with it the names that defined it.

Whatever the circumstances, one constant remains. Johnny plays that guitar just like ringing a bell.

Come midweek – hump day – Johnny Nicho­las journeys some 70 miles from Fredericksburg to South Lamar’s knighted nightclub. The 90-minute drive is unseasonably green, compared to last summer’s parched landscape. This year’s good weather brought back the famed peaches from Fredericksburg and Nicholas brings a box full of them to the Saxon weekly, as long as the crop lasts, free for the taking.

Nicholas has driven to and from gigs for much of his 64 years. And driven is the right word. Whether by vehicle or passion, he’s followed his restless instincts, always. It led Nicholas, from a Greek family in an Italian Rhode Island community, to leave home in 1966 and never move back.

“The Greek music I listened to as a kid was really spooky,” says Nicholas, leaning forward. “I didn’t know at the time it came from a form called rembitika, Greek blues. Born in the prisons during the dictatorships of the Thirties and Forties – on handmade instruments. Haunting, moaning, soulful stuff.”

Rembitika had slid into Nicholas’ past by the time he ventured to a popular college town that started with the letter “A” and boasted a notable music scene. In the Seventies, Ann Arbor, Mich., teemed with youthful creativity, a lively and politically aware music populace, and the Ann Arbor Blues and Jazz Festival. That was all it took to convince Nicholas, who returned to New England, completed bookings, and hopped the fence along I-95. With a duffel bag and guitar, he hitchhiked to Ann Arbor.

“[Festival producer] John Sinclair of the White Panther Party decided to rename us because he thought it was cool we had a chick playing bass in the band,” recalls Nicholas. “The poster came out and there it was: ‘The Boogie Brothers with Sister Sarah Brown’!”

He still chafes at the slight, while laughing, decades afterward, “It was supposed to be Johnny Nicholas & the Boogie Brothers!”

Separately, Brown and Nicholas ended up in Austin within the decade, but at that juncture, life in Ann Arbor was joyous. Drum­ming for the Boogie Brothers was another friend, Fran Christina, future Fabu­lous Thunderbird. In that small town, Nicholas also met a Texan named Stephen Bruton.

“Bruton was playing with Geoff Muldaur, who we were opening up for. Stephen and I became fast friends, used to exchange letters, before the cell phones and email. And that’s how I met Geoff, through Stephen.

“Years later, the Texas Sheiks project came about because an old blues patron named Roger Kasle wanted to do something to bring Stephen’s friends together when he got sick (see “Sheik to Sheik,” Feb. 19, 2010). And Stephen is how I ultimately connected with Bruce, Scrappy, and Chipman.”

A cardboard box of ripe peaches rests on the end of the bar at the Saxon, a sure sign Johnny Nicholas is in the house. At stage right, Scrappy Jud Newcomb listens to his guitar, drummer John Chipman tests a snare, and first-call steel player Cindy Cashdollar sets up stage left. The load-in door opens; bright light streams into the room’s dim recesses and across Chipman’s drum kit as Bruce Hughes hoists his bass onstage. Few seats are left in the audience by the time Nicholas steps onstage.

Nicholas in performance is a call to action, a way of demanding attention to the music. He’s easy to watch, the handsome bluesman come calling, playing guitar, piano, and harmonica. Onstage, he brings authority to the blues: The kid who sought out Mississippi Fred McDowell, took a bus to meet Hubert Sumlin and Howlin’ Wolf, and became a man who played with Snooky Pryor and Big Walter Horton. Playing blues gave him the right stuff to join Asleep at the Wheel for their first Grammy, prompting his move to Austin in 1978.